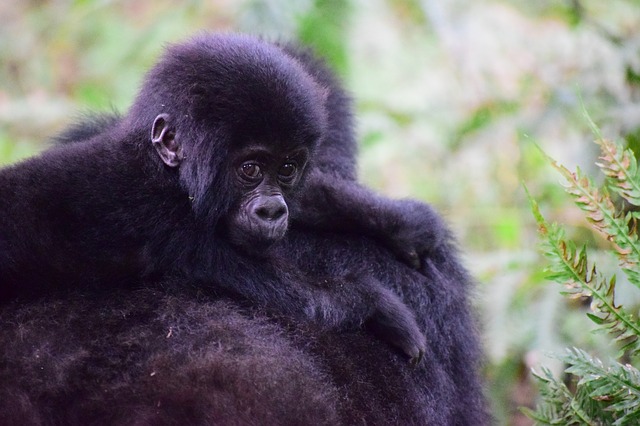 Photo: Baby gorilla on their mother's back walking in the mountains of Uganda

The gorilla is just meters away, sitting on a jungle bed picking leaves from a tree and looking directly at you with his big brown – uncannily human – eyes. We share more than 96 percent of our genetic material with these gentle giants, which no longer feels surprising when you find yourself experiencing one of these intimate moments of connection firsthand.

The rich vegetation of Bwindi Impenetrable Forest in Uganda is one of the few places in the world where mountain gorillas can survive. Their numbers were critically low until the formation of the national park in 1991 when conservation efforts began to make headway, largely funded by sustainable tourism initiatives. Since then, gorilla tracking has become amongst the world’s most sought-after encounters with wildlife, allowing local economic growth and a rare conservation win as the gorilla population slowly grows.

There are now 600 mountain gorillas in Bwindi, half of the total population worldwide, with 12 habituated families, which means those gorillas are familiarized with human contact and are safe for tourists to visit.

The success can also be attributed to collaboration between different conservation groups, communities and initiatives, who work in sometimes hostile environments with the mission of protecting these mysterious and beautiful primates.

The UWA manages 10 national parks across Uganda, including Bwindi, and administers the conservation and tourism activities taking place there. Mountain gorillas are threatened by poaching, human contact, disease and habitat loss, and it’s UWA’s responsibility to develop strategies to address these challenges, which includes employing stakeholders and communities that live in the protected areas in order to incentivize them to value and preserve the wildlife there.

To track the gorillas, you must first buy a permit from the UWA, either through your tour operator or direct from their offices in Kampala. Permit numbers are limited – only eight people are allowed to visit each gorilla family per day – and at high season they often sell out.

A veterinary doctor and premier primatologist, Dr. Gladys Kalema-Zikusoka saw the impact human disease was having on gorilla populations and founded CTPH to tackle community, animal and environmental health with one holistic approach. The NGO now provides health care services and hygiene education to the local community and trains a Human and Gorilla Conflict Resolution Team to safely move primates away from farmland. CTPH is also behind the social enterprise Gorilla Conservation Coffee, buying beans from a cooperative of 500 farmers at higher-than-market prices. The idea is that the more locals who benefit from the gorillas’ ongoing presence, the more tolerant they’ll be when their banana plants are inevitably destroyed and the more actively they’ll participate to protect the species.

CTPH hosts tourists in simple accommodation at their conservation center and organizes gorilla treks led by their own staff, as well as with Dr. Kalema-Zikusoka herself.

Many children in the rural villages of Bwindi were once pulled out of school early so they could learn how to hunt bushmeat and grow up to be poachers, just like their fathers. Now, thanks to a number of initiatives such as the Reformed Poachers Project, there is an alternative. Making use of their experience and knowledge of the forest, former poachers and their adult children are offered alternative employment as porters for tourists who come to Bwindi to track the gorillas. When you depart on your trek, you’ll be offered the opportunity to hire a porter for USD $15. They will clear paths, carry your bags, and help you cross difficult terrain. Many of these young men and women will share a similar story, and the small fee you pay is a way for the benefits of tourism to reach further through the community and stop the cycle of poverty that pushes people into poaching.

The project also trains former poachers and their children in farming, providing tools and education; all they have to do is hand in their hunting gear. The crops, such as coffee, oyster mushrooms and honey, are sold to local schools, restaurants and hotels, and also feed their families. To support the work of the Reformed Poachers Project, look for opportunities to purchase produce or enquire about taking a community tour. Since it began in 2010, the number of snares found has dropped from 800 a year to nearly zero.